A thousand girls and boys are set to compete in a major schools rugby tournament being hosted in the West End.

The event was launched this week at Scotstoun Stadium, home of Glasgow Warriors, with players Pat MacArthur and Matt Fagerson.

The seven weeks of action will involve schools from across the west, central and southern Scotland.

The event is the result of a landmark three-year partnership announced between Glasgow Warriors and SP Energy Networks which saw the firm become the club’s official community partner.

The competition aims to showcase the rugby stars of tomorrow and promote active and healthy lifestyles to young people.

He said: “Our partnership with SP Energy Networks allows us to be more engaged than we ever have been with community rugby.

“The more kids we have playing the game in this country the better, producing active kids with healthy bodies and healthy minds.”

He added: “This Championship gives over 1,000 kids the opportunity to play at the home of Glasgow Warriors and many of these kids are picking a ball up for the first time and will hopefully have a life-long involvement in the game.”

Each participating school will take part in qualifying rounds at Scotstoun, beginning at the end of February.

Schools will field teams competing at S1 and S2 level boys’ teams as well as an under-15s girls’ team.

Winners will progress to a semi-finals stage then a final which will be played on the main pitch at Scotstoun.

Throughout the Championship, pupils will get an opportunity to meet and learn from members of the Glasgow Warriors squad who will be attending each day of competitive action.

The 2018 champions will take home the SP Energy Networks Warriors Championship trophy and brand new rugby kit for their school.

SP Energy Networks Chief Executive, Frank Mitchell, said: ‘We are very proud of our partnership with Glasgow Warriors as it allows us to continue our focus on community engagement.

“We are delighted to support the launch of the SP Energy Networks Warriors Championship and look forward to watching the games and getting involved in the tournament activities.

“Good luck to all of the schools involved.”

“Schools from nine different local authorities in Scotland will be coming to Scotstoun to compete and we’re all really looking forward to the action getting under way later this month.”

Come and work with me and @Govanhill_mag! We're looking for someone to take on the revenue side of things - something I've been doing myself so far. Pleased to now be in a position to hand that over and seeking someone to pick up the ball and run with it! Any questions, just ask. https://twitter.com/Govanhill_mag/status/1463505150417461249 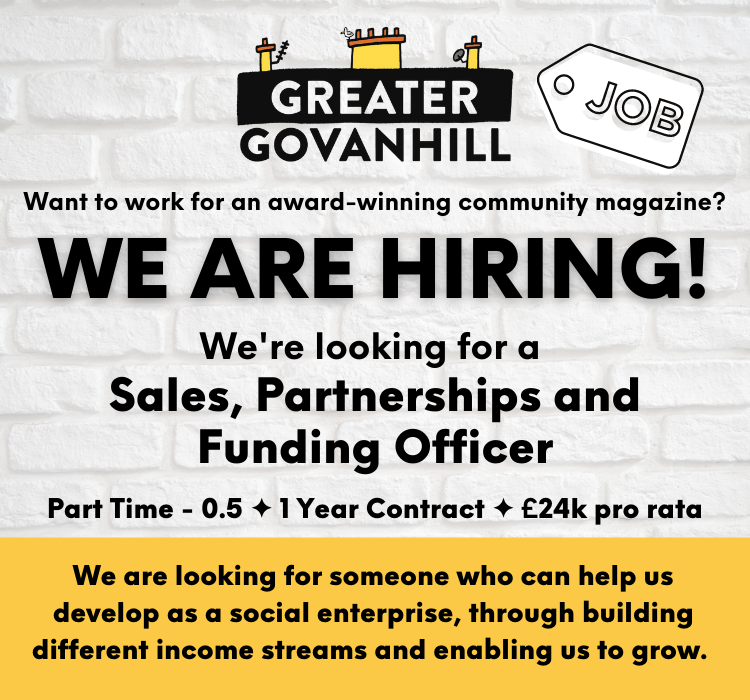 Very exciting job klaxon! We're looking for someone to work P/T on ad sales, partnerships, memberships & grant funding. It's a crucial role, that will be varied & interesting with opportunities to learn and to really help a new community magazine flourish! https://www.greatergovanhill.com/notices/we-are-hiring-sales-partnerships-and-funding-officer

Around 50 local artists and makers will be selling at the festive market on different days. #ad #sponsored #ByresRoad #alchemyexperiment

Artists and local makers will be setting up stall at a festive market at the Alchemy Experiment arts hub on Byres Road.